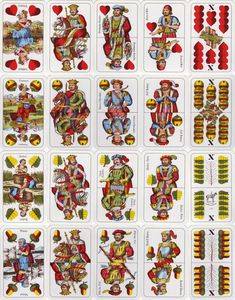 Bauernschnapsen follows the basic rules of Schnapsen, but is actually a very different game for 3 and 4 players. In the "multiplayer" Bauernschnapsen, players may announce a certain contract of victory conditions (Bettler (Beggar) --&gt; player won't win a single trick; Gang (Walk) --&gt; player wins all tricks; Schnapser --&gt; player wins first three tricks and reaches 66;...) with regional differences regarding which are considered legal options, or play a "normal game" (follows closely the Schnapsen rules). All of which have different victory point values; the highest one announced gets played. Furthermore, an opposing player can announce to "counter" a contract and be the one to play it instead, which doubles the point value. In the 3-player variant, the two other players temporarily ally to win over the announcing player. In the 4-player game, you are permanently allied with the player sitting opposite you. The first player/group to reach 24 points will win the set. After an agreed upon number of won sets (with those won without any points gained by the opposing players, so-called Bummerl, counting double) is reached, the match ends.