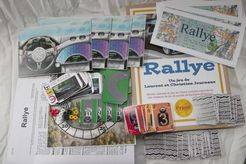 Aim: To be the fastest driver on the special stage of the rally. Principle of the game : The players must go through the different road sections of the special stage made with special cards put on the table at the beginning of the game. They must read the difficulties of the road and adapt their speed and the orientation of the wheel. To change speed and direction of the wheel, players have cards with points. Players will have to drive over the speed limits (but not too much) to win the race. End of the game: The game is finished when someone crosses the finish line. The player with the fewest "seconds" chips is the winner. This game received a "mention spéciale du Jury" at the 2004 gathering of Boulogne Billancourt for game designers.