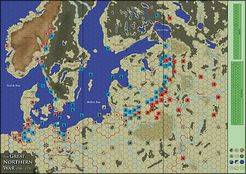 From the publisher's website: The early years of the eighteenth century were a time of great, and long lasting, changes in Eastern Europe. It saw two former ‘Great’ powers decline; for Sweden it was a cataclysmic experience as they were reduced to a small or medium power. While Poland-Lithuania started on the path that would lead to extinction later in the century. It saw two medium sized powers, Denmark and Saxony, fail in their bid to gain, or regain, ‘Great’ powers status. It saw two powers rise; for Brandenburg-Prussia it was an important stepping stone to Great power status later in the century. While for Russia went from being ‘an obscure barbarous nation’ to a Great power thanks to its victories Polemos: Great Northern War is aimed at gaming large scale actions from this time. It is quite possible to stage, play and complete actions in an evening and even the largest action should be relatively easy to play. The emphasis is on the Great Northern War but other actions from this period can also be fought. The wars against the Ottoman Empire, the Polish Civil War and other actions in the period 1695 to 1725 may also be fought. You can be Peter the Great of Russia and face the cream of what was probably the best army in the world of this period – Charles XII Swedish army. Perhaps instead you could as Peter battle the Ottomans on the river Prut. The Great Northern War has perhaps not been gamed as much as would be expected for such an important conflict with many interesting battles and armies. To a large extent this is because of the lack of information about the war and its battles. Polemos: GNW will introduce information and army lists that will rectify this. You too will be able to command the combined Saxon, Polish and Russian army at the battle of Kalisz (1706) or re-fight the Polish civil war battle of Koniecpol (1708).