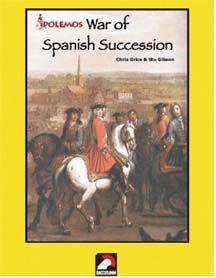 From the publisher's website: First of the great dynastic struggles of the eighteenth century, the War of Spanish Succession involved most of Europe. A state which did not back up its policies with troops in this period probably supplied them as mercenaries to those which did. Central to the causes of conflict were the expansionist ambitions of Louis XIV, King of France, which were opposed by a series of shifting alliances. Towering over the period is the figure of John Churchill, Duke of Marlborough, and his close ally Prince Eugene of Savoy. This is the classic campaigning period. Each year, the armies marched across Europe is a colossal chess game on a board constricted by river barriers and studded with fortresses. These manoeuvres culminated in great set-piece battles, including Marlborough’s ‘big four’: Blenheim, Ramillies, Oudenarde and Malplaquet. The War of Spanish Succession has much to recommend it to wargamers; uniforms were colourful (but are simple to paint.) and manoeuvres were bold and forceful. Standing armies were in their relative infancy at this time, and the period saw the founding of traditions which were to last the centuries. Polemos War of Spanish Succession is specifically aimed at enabling the wargamer to fight large scale actions; actual battles, rather than small scale skirmishes. Systems for firing, melee and morale are straightforward and easy to learn, but allow your troops to emulate the tactics used by their historical counterparts. For instance, troops using the platoon firing system have improved close range factors, while others using fire by ranks are allowed to be more aggressive. The basic playing piece in Polemos is the Base. An army consists of a number of bases, organised into Brigades and Commands, either to an historical model or by the use of army lists. The size of armies in this period varied enormously; in Polemos WoSS, a general’s command can be from eight to 15 bases, but an army can comprise anything from two commands upwards. Polemos War of Spanish Succession is designed to not only give the feel of command in the period, but also to give something of the look. The actual number or composition of figures on a base is unimportant, but it should mount enough figures to make it look like a real unit of troops. The sight of your lines of steady musketeers or massed cavalry advancing across the table should fill your opponent with awe and trepidation!