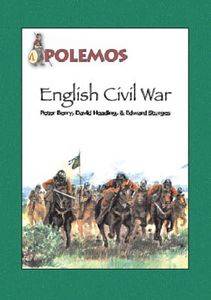 From the publisher's website: During the middle years of the seventeenth century, the British Isles underwent a period of huge change, catastrophic wars and campaigns, political revolution, social upheaval political experimentation and religious ferment. It was a period when the famous and the infamous made their entries into the history books leaving their legacy and their legends. Names such as Ralph Hopton, William Waller, Prince Rupert, Thomas Fairfax, the Earl of Essex, the Earl of Newcastle, Owen Roe O’Neill, The Earl of Montrose and Duke of Argyll can still evoke fierce loyalties and harsh criticism even today. The characters of those chief protagonists, King Charles I and Oliver Cromwell, are still considered, analyzed and argued over by successive generations of historians. There is little surprise therefore that the English Civil War has always been a firm favorite for wargamers. Polemos: English Civil War is unashamedly aimed at large scale actions. It is quite possible to stage, play and complete actions the size of Edgehill, Marston Moor and Naseby in an evening. The basic playing piece in Polemos is the Base. An army is comprised of a number of Bases and can be built either using historical orders of battle or on Army Lists. Bases are generally grouped into Brigades. Armies can vary in size from around 15 to 50 Bases. Polemos:ECW is designed to allow the player to represent an English Civil War army using a limited number of bases, each of which represents a tactical element that may act individually. Each base is designed to have enough figures on it to look like a real unit. The design focus eliminates fiddly lining up, precise numbers of figures of musketeers and pikemen etc in favour of a broader approach.