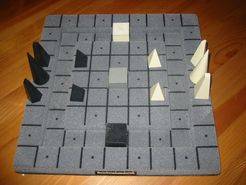 (Description from the box) The game of strategy and wit for two players involving thirteen geometric elements and an invisible force. The geometric shape of the individual playing pieces indicates how they may be moved, while maintaining a simple visual and tactile quality. The invisible force relies on the imagination of the players. The concept is similar to the repelling forces between two magnets. In the game 'Altar' imaginary repelling forces exist between the different colored playing pieces. The object of the game is for a player to maneuver the opposing color altar (cube) into the central recess and then to place their own templar (cone) on top of that altar (cube) to win the game. The three dimensional design of the board incorporates recessed areas. These may only be crossed by the raven (hexagonal shape), which normally requires an obstacle to jump over to complete its move. The other playing pieces may only cross these areas by using an altar piece (cube) as a 'bridge' or 'stepping stone'. The unique concept which controls and unifies the game enables 'Altar' with relatively few pieces to develop many permutations. Consequently a depth and level comparative to that of 'chess' can evolve with the individual.