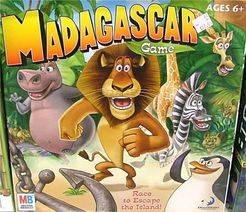 Summary from the box: "Alex and his friends are stranded on the island of Madagascar. Lucky for them, the Penguin's rescue boat will take them home, but YIKES, it's all the way at the other end of the island! Can you help them race across the island and get onto the boat safely? Steer clear of the Fossas, the dangerous animals lurking around! Be the first player to get to the rescue boat and win." Components: 4 Character pawns: Alex, Marty, Gloria, and Melman. (Medium weight cardboard pieces in plastic bases. 12 Fossa pawns: 6 red, 6 green Deck of 54 Cards. About half the size of a regular playing card, but about the same thickness. 1 Fossa die. 6 sided. two zeros, red two, red three, green four, green five. Game board: Trifold. 15" x 30" For 2-4 players, ages 6+ Game Play: Each player puts their pawn on the start space and is dealt four cards face down. Cards are move 2, move 3, escape, special move 3, and cancel. Each turn has two parts: 1. Roll Fossa die and move a correspondingly colored Fossa the required spaces. 2. Move a character pawn 1 space in any direction, OR play a card, OR trade three cards back to deck and get three new ones. If a Fossa winds up on your spot, you are under attack. There are 2 ways to escape during your turn: 1. During part 1 roll the die and if you get the color matching the Fossa attacking you, you can just move it away. 2. Play an escape card. (Other players may play a cancel card on top of your escape card though.) The first person to make it all the way to the boat wins. Game play is approximately 30 mins or so depending on the number of players. Play can be cut-throat. Escaping depends on luck rolling the correct number/color or drawing an escape card and no one playing a cancel card.