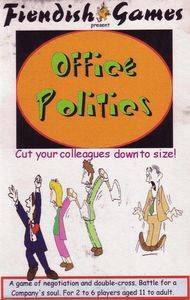 In Office Politics, players attempt to establish themselves as the dominant force in a company, which is represented as a pyramidal hierarchy of departments. Players weave their webs of influence through the company, starting from the bottom and spreading through the connections among departments. To establish control over a department, a player must spend kudos (the game's currency) and he or she must outspend other players with similar interests. Each player also has a deck of cards that can help them to establish control, or to hinder others from doing so. Each controlled department gains the player income; higher level departments yield more kudos. Once a player controls twelve departments, he or she is declared the winner and the game ends.