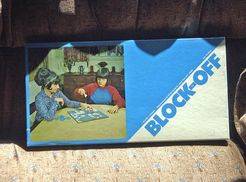 Block Off consists of a playing board, with a plain 8x8 grid, and a bunch of triangular plastic tiles (diagonal cut squares) in white and blue and a single die. Players alternate placing 3 triangles of their color, attempting to complete squares in their color, and patterns of completed squares as well. On a single turn they may ONLY complete squares of their color by playing against pieces already on the board. The game is an instant tie if played symmetrically. (The rules even warn against this.) The mode described above is called "Thinker Style," vs the "Gambler Style" where each player rolls a die to determine how many pieces they can place. This is intended to eliminate ties.