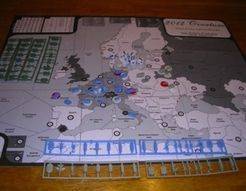 From the publisher's website: A war game for 2 or 3 players featuring plastic jets, tanks, hovercraft, helicopters and missile launchers. After decades of failed economic reform the republics of the former Soviet Union still lie weak and impotent. With the ultimately successful, but costly, war on terror behind it the United States is consumed in a wave of isolationism. In a series of daring diplomatic maneuvers and blitzkrieg military offensives the whole of Central Europe is swallowed in a French anschluss. (ANNEXATION OF CENTRAL EUROPE BY FRANCE) Britain, its economy wrecked by French trade sanctions, stands alone amidst a conquered continent. The Mediterranean Sea is closed to British commerce. With the Atlantic sea lanes in danger, arrangements are made to build bases on Madeira and the Canary Islands to supplement the British presence in the Azores. Europe once more finds war thrust upon it!