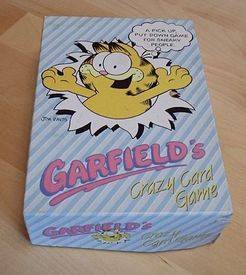 A Garfield themed variation on the card game "Uno". From the back of the box: "A pick up, put down game for sneaky people who get a kick out of tricking other players. The trick is to make them pick up while you're putting down. If you're tricky enough you'll get rid of all your cards." The box contains 72 Garfield cards and a rule sheet. There are four colored "suits" with cards numbered from 2-6, and a number of special cards which can affect turn order and force other players to pick up cards, miss turns, etc.