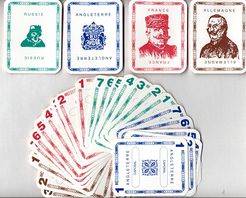 Fanatically popular trick taking card game played in the Quebec region of Bellchasse (St-Anselme). Generally it is played with 2 teams of 2. Players bid on the number of tricks they think they will win. High card taking the trick, and each trick being worth 1 point. Each suit represents a different army from WWI (ex: instead of an Ace of Hearts you have a 7 General of Russia) There are 4 special cards in the deck. If you win a trick with the "Joffre" (French commander in WWI) then he is worth an additional 5 points and taking the German "Kaiser" will cause you to lose 3 points. The other 2 special cards (England and Russia) have no value.