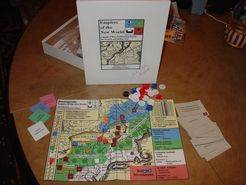 During the first half of the 18th Century, France and England vied with each other for control of North America. At the same time, the colonists and Native Americans conducted their own private war in the wilderness. Into this theater entered men of daring who profited from this conflict. In Empires of the New World you take the place of entrepreneurs such as Johnson, Bigot, Washington, and others, who frequently played one side against the other for personal gain.