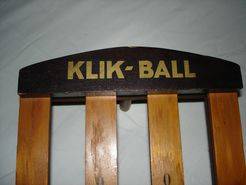 A simple dexterity game where players hit their ball up one of three inclined tracks with a small cue. Along each track are stops that "klik" when the ball passes it, stopping the ball from going backwards from that point. Each track has eight stops, breaking it into eight scoring sections worth from 0 to 50 points depending on where the ball comes to rest along the track. After players have hit their ball up the track, the score is noted and players return their ball to the bottom of the track and begin again. Klik-Ball may be played to a certain score (the first player reaching or exceeding a set score is the winner) or for a set time period (the player with the highest score at the end of the time period is the winner). Klik-Ball may also be played solo, with a single player hitting each ball.