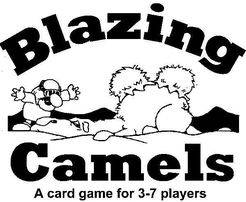 Blazing Camels is a racing game, in which 3-7 players race their camels to the finish line by playing cards. Each player has a set of cards labeled one to nine. During each round, each player chooses a card and after putting it face down, they reveal their choices simultaneously. The highest untied played card stays on the table while the others are placed into their players' discard pile. If the winning card is a 1, 2, or 3, the player's camel spits, allowing its owner to remove the top face-up card from any other player. If a player runs out of cards to play, he or she picks up his or her discard pile and continues playing. The first player to accumulate 40 points from his or her face-up cards wins the game.