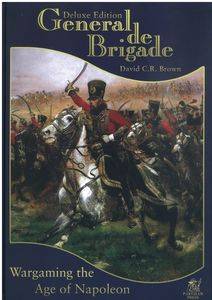 From the author's website: General de Brigade Napoleonic wargames rules use infantry battalions, cavalry regiments and artillery batteries as the basic tactical units. The figure scale is 1:20. Over the years I have used various sets of Napoleonic wargames rules – some good, others too complicated or simply not "Napoleonic". Most however, were split into two very separate camps - those aimed at battalion level and those aimed at army level with little or no middle ground between the two. General de Brigade was designed to combine the appeal of battalion based games with the most important aspects of command and control from army level games. It was important therefore to base the game at the correct level within the military structure in order to achieve this. The division seemed the most suitable level. When players field a division they are in command of a number of brigades and it is to this level that most wargamers are suited. This is because after spending hours researching and painting our armies we want to maneuver each and every unit, overseeing their every volley, melee and morale test, At brigade level this is exactly what is expected of the commander – he would be concerned with deployment, formation and when to fire – here formations such as column or line do matter! However the use of brigades and brigade orders introduces a command and control factor that limits the 'nippy little battalion' syndrome and restricts the wargamer from doing whatever he wants with any unit whenever it suits him. General de Brigade allows wargamers the freedom to command and maneuver each battalion or squadron but also includes higher command decisions such as brigade objectives, the timing of assaults and the deployment of reserves.