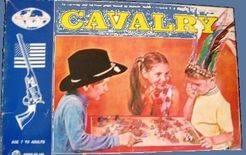 Cavalry is subtitled "an exciting and tactical game based on historic battles between US Cavalry and Apache Indians." The game is published by Epoch Co Ltd as part of their World Wide Series. The box art shows three 7 year olds enjoying a game, the two boys involved are wearing appropriate headgear to denote which side they are on, while the spectator girl is either providing encouragement or a offering a tip to one of the players. The board represents the desert and is laid out using a square grid, but what give the game its flavor are the fixed plastic mesa that rise out of the game board providing irregular terrain features. The mesas (as well as Fort Apache and the Indian Camp) end a pieces move and cannot be jumped over. To win you must capture your opponents flag. The playing pieces are miniature cavalry and Indians. The cavalry force comprises of 12 men and 3 Gatling guns and are placed in predetermined starting positions on the board. There is 1 cavalry captain that can move any number of squares in any one direction, 7 cavalry men that move like rooks in chess, 3 Gatling guns that move like a chess bishop and 4 guards that move like a chess king. The flag cannot move. The Indian force mirrors their Cavalry opponents with 1 chief, 7 archers, 3 rifle men, 4 guards and 1 emblem. The number of pieces a player can move in a turn is determined randomly by a spinner built into one of the mesas. Depending on the spin a player will be able to move either 3, 2, 1, or none of his pieces. There are also two player aid cards that assist players in remembering how their pieces move. The rules are printed on the inside cover of the box lid and the box lid is also marked "made in Japan".