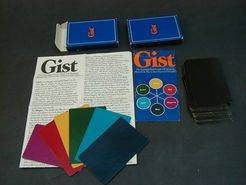 Gist is a card game of combing colors to make other colors. Players try to take the most cards. The deck is comprised of only six different types of cards: magenta, red, yellow, green, cyan and blue. Each round a player starts with 6 dealt cards, and may do one of four actions: Show, Activate, Combine and Take. To show a card a player takes a card out of is hand and places it on the table in front of him, it still belongs to him. To activate, take a show card and place it in the center of the table, which now belongs to all. To Combine, a player may take one card from his hand and combine it with one of his show cards, combine two of his show cards, combine one of his show cards with an active card, or two active cards. Only cards whose colors are one color apart on the color wheel may be combined. For example red and blue makes magenta, and blue and cyan makes green. To Take cards, a player takes one of his show cards (or a combination as if it were the combined color) and an active card, (or combination) and puts them aside for scoring at the end of the round. To take, the colors must be exactly opposite on the color wheel, for example a blue show card (or magenta, cyan combination) takes yellow active card (or red, green combination). Advanced rules allow combining more than two cards to make combinations, thus yellow combined with a blue/red combination (as if it were magenta) makes red. Although the number of players is stated as 2 to 6, there is no five player version. Two decks of 36 cards, six of each color come with the game, one deck is used for 2 or 3 players, both are used for 4 or 6 players.