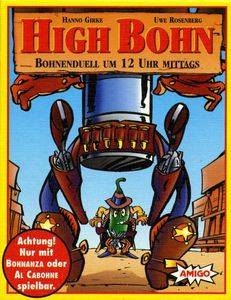 High Bohn: Bohnenduell um 12 Uhr mittags (Bean Duel at High Noon), from AMIGO, is two expansions and a new bean type in one box. Both expansions add structures you may purchase with Bohnentalern that match that structure. The more valuable structures allow you to bend the rules to your advantage in specific ways. Of course, the structures you've purchased count toward your final score, as well. For instance, the 4-Taler Bank (Rote Bohne) in High Bohn allows its owner to relocate one card in her hand at the beginning of her turn, which bends the rule stating that cards in the hand never may be rearranged; and the 3-Taler Nightbar (Puffbohne) establishment in Prohibohn allows its owner to alternate the bean type in each field, which bends the rule stating that each field must contain only one type of bean at a time. The 36-card High Bohn expansion for Bohnanza is an updated release of the original Lookout Games edition, with some alterations to the building distribution. The 34-card Prohibohn expansion for Al Cabohne is only for two players. (Al Cabohne normally also permits solo play.) Both High Bohn and Prohibohn have the option of being played with the 22 Cognacbohnen. In the Cognacbohne variant of High Bohn, the Distillery is added to the roster of buildings available for purchase. In the Cognacbohne variant of Prohibohn, the available establishments additionally include a Pub. High Bohn: Bohnenduell um 12 Uhr mittags is part of the Bohnanza family of games. Expands Bohnanza Al Cabohne Re-Implements High Bohn