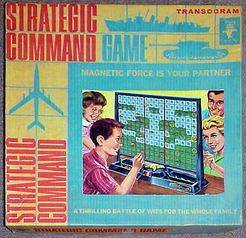 Strategic Command uses a vertical board between the players, where each player moves his pieces on his side of the board and cannot see the other player's pieces. Each piece has a magnet on it, which will repel off the board (most of the time to the tray in the base) any piece in the exact same space on the other player's side. A spinner in the base gives you 1 to 4 movement points. The first player to repel the other player's star piece (which cannot move) by moving onto its space, which is known, wins the game. There are tanks which can only move on land, ships which can only move on water, and jets which can move on either.