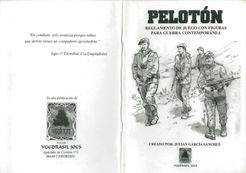 From the publisher (edited): "Pelotón is a mixture between RPGs and wargames created by Julián García. Pelotón tries to represent combat during the whole 20th century... it's possible to play in WW I, WW II, Korea, Vietnam, Afghanistan, Ex-Yugoslavia, or even to simulate anti-terrorist actions. The number of soldiers that the players take is approximately 10 (a squad), each of which is represented by a figure (scale 1/72 or 20mm) and has a card describing its qualities. Pelotón can be played as miniatures rules, or as an aid to RPGs in those combat situations in which the excessive number of prominent figures makes the action slow."