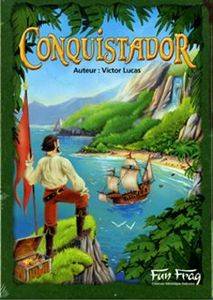 A simple card game of empire-building rivalry. There are some 15 territory cards rated 1 through 3, some of which are dealt out to the players at the start (each gets a 1 and a 2 territory). There are Revolt and Cannon cards. The remaining cards are Development cards, each rated from 1 to 6. On your turn, you draw a card and play or discard one. The deck of a little over a hundred cards is played through and then everyone scores. Once the deck is exhausted, play continues until everyone's hand is also exhausted. Once your hand drops below four cards, there are some limitations on card play that come into effect. When developing a Territory you own, you ideally would play a 1, then a 2, and so on up to a 6. The developments must be played in increasing numerical sequence, but they need not be consecutive. At the end of the game, a territory scores the number of development cards on it times its basic multiplier (1×, 2× or 3×) - so an undeveloped territory is worthless. If you managed to have a sequence of at least four consecutive developments on the territory, you score a sizable bonus. Revolt cards prevent a territory from being developed or attacked; they also cancel an existing revolt card (there are only 8 of those in the deck). It is sometimes good strategy to play a revolt on a territory of your own to prevent it from being attacked. Cannon cards are used to attack other players' territories; you play a cannon face down, and so does the defender. Both reveal their cards and add a die roll. The attacker's total must beat the defender's for the attack to succeed. When it does, you roll a die and this indicates how many cards you plunder from that territory. If that roll is high enough, you can even steal the territory itself. Plundered cards must be allocated to your territories right away or discarded. Cannon can also be used, if rated four or better, to empty one of your territories from its development cards so as to redeploy them - in effect, you are raiding yourself. A number of small variant rules are supplied in the rule book. The cards are printed in French, English and Dutch. It is good strategy to build your hand for the end game, so you can, for example, protect a territory with a Revolt, then unprotect it, redeploy Development cards with a strong Cannon, and complete the territory's development with your last few card plays. Awards Card Game As d'Or 2001