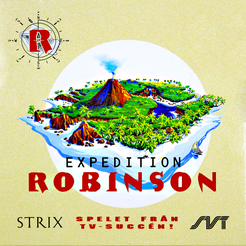 Based upon the Swedish original TV competition "Survivor", where the participants stay on a desert island for several weeks, competing in games and trying to get enough food to survive. Through bluffing you should make your opponents believe that your Robinson characters are someone else than those that you have! The games in the game are both trivia and dexterity types. Each turn is a day on the island, which consists of 4 actions: Choice of Robinson character to move (it doesn't need to be your own, as you may bluff the other here), Investigation of the island, A Robinson competition and The island council (where you elect which character has to leave the game this turn). The characters may also disappear out of the game through "illness" - a special symbol tile, which you might find during the exploration.