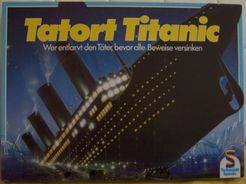 A "Clue"-like game. Within 25 turns find as many clues as possible, to make a deduction of the suspect, his motive, murder weapon, place of murder and time of murder. To begin the game, one each of these cards are secretly placed in a closed envelope. Every player plays one of the 6 detectives who happen to be aboard Titanic. Each player also has one of six different random special qualities. After the murder there are 25 hours left before the ship sinks, so you are in a hurry to solve the mystery. If none has found all the clues after 25 turns, the player with most correct clues is the winner. You collect clues either through visiting the different rooms and collecting "clue cards" or questioning (=draw a card, which he has found) one of the other detectives, which you happen to stumble upon.