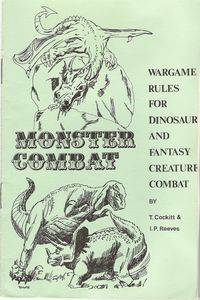 The first edition of this game was published in 1975 and was originally titled Rules for Prehistoric Animal Combat. In 1979 the game was re-published to include the Fatasy Creature Combat Set. The original game contained 12 Dinosaurs. Ankylosaurus Cetiosaurus Corythosaurus Dimetrodon Iguanodon Megalosaurus / Gorgosaurus Monoclonius Stegosaurus Styracosaurus Triceratops Tyrannosaurus Allosaurus Three Dinosaurs were dropped from the 2nd edition, Cetiosaurus, Corythosaurus and Dimetrodon. The individual dinosaur stats were also modified from the original stats. Subtitled "Wargame Rules for Dinosaur and Fantasy Creature Combat," this is a set of miniatures rules that covers just that. The main thrust of the game is in the Jurassic and the Cretaceous, but rules have been added to allow dragons and other non-sentient fantasy monsters. You can use any toy dinosaur or dragon figures you can find in toy and department stores - rules are given to adjust scale for size of the figures. The rules cover creating the terrain and its effect on movement and combat. Rules are given for the various types of dinosaur attacks (as well as fire-breathing) and defenses. Various dinosaurs are covered in particular: Allosaurus and Tyrannosaurus, Stegasaurus, Triceratops, Ankylosaurus, etc., and which period they were found in. Actions are broken down into 12 phases: faster creatures get an action each phase, while a slower one might only act every third phase. Rules are given for degrees of arc from the spinal plane a creature can bite or tail strike, and illustrations show where creatures are armored more heavily. Lots of detail in this small booklet.