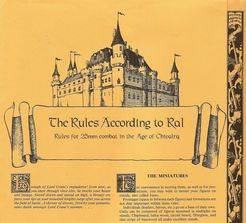 These are simple rules for Medieval combat using miniatures. Ral Partha was a miniatures manufacturer (now owned by Iron Wind), and they gave these rules away for free in an attempt to sell more miniatures. The rules are 4 pages long with an additional 1 page player aid sheet. Fairly standard medieval miniatures rules for large armies. 12 infantry to a stand to represent a large unit, or 6 cavalry. Leaders are individually based. The rules cover morale, bow combat, melee, movement, individual combat between leaders, and point cost for building armies. Iron Wind has an adaptation of these rules for free on its web site, minus the player aid sheet. They even kept the same artwork, but added fantasy armies, which are lacking in the Ral Partha original.