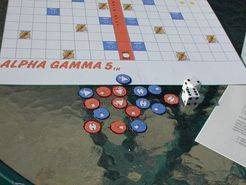 Alpha Gamma 5 is a boardgame for 2 players Ages 8 and up. Both players command armies of ships and make "moves" to deploy the ships to attack the other player's ships. The player with the sole surviving ships in both galaxies, wins the game. Ships are powered with shield power, electra-volt (universal power) and phaser power which is used in the game. Also special weapons are also used such as extended firing range, photon torpedoes and nuclear bombs. Contains: Color gameboard, 16 game pieces, 2 dice, scoreboard, and complete rules