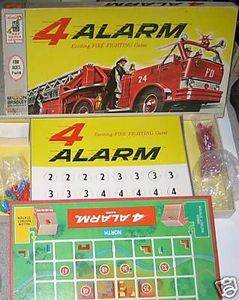 Race to put out the fire in this vintage game from Milton Bradley. The subtitle is "Exciting Fire Fighting Game." [DESCRIPTION FROM INSIDE BOX COVER] 4 ALARM GAME For 2, 3, or 4 Players This exciting FIRE FIGHTING game is for all who love the fun of playing fireman. Players are District Chiefs, each with 3 ENGINES of his own color. A CARD is drawn telling where a 2, 3, or 4 ALARM fire has started in the city. Each Chief, in turn, moves his ENGINES, by throw of the DICE, along the streets to put them alongside the FIRE and put it out. A 2 ALARM FIRE requires 2 ENGINES to put it out, a 3 ALARM FIRE needs 3 ENGINES, and so on. If a fire is not put out when another CARD is drawn, it may SPREAD to the North, South, East, or West. When a fire is “put out,” the owner of each Engine at the fire gets a POINT. After ALL CARDS are drawn and all fires “put out,” the game ENDS and the player with the MOST POINTS is the WINNER.