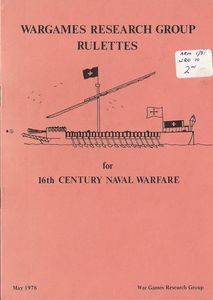 A "Rulette" is a small rules booklet, according to the publisher. The whole booklet is very short and the rules are very concise (not covering every possible detail), but still very playable. This is a set of skirmish rules for wargaming, where one model equals one ship. (However, if transporting troops, a based group of figures represents 500 foot soldiers or 250 horse.) Set largely in the Mediterranean Sea, it deals with both sailing and oared ships. Only a few of the ships have cannons - most do not, in this era - but most forts have them. Rules are given for movement by oar and sail (wind is a factor), beaching, launching, shelter from the wind, and also for land units transported by these ships. Combat covered includes cannon fire, small arms fire, hand-to-hand fighting, and morale. Rules for terrain are covered, including islands, beaches, assaulting a fort, etc.