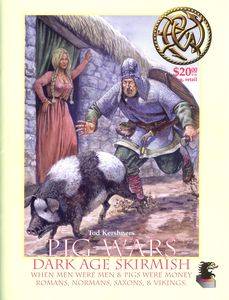 想玩 拥有
Pig Wars: When Men Were Men and Pigs Were Money

Pig Wars is a skirmish-level miniatures wargame set in the Dark Ages: after the Fall of Rome, before the Norman conquest of England. Each figure represents one person. Each player controls one "unit" of 20 figures and is given one 52-card deck of ordinary playing cards, which are used instead of dice in this game. Each unit has one chit (or 3x5 card) used to determine activation randomly in a given turn. Units are distinguished by a bar of color on the base: since ten players can be playing at once, and there are no uniforms in that era, this is important. A number of stripes (from 0 to 3) on the color bar shows the morale level of the figure, from militia to average to proven veteran to elite veteran (leader). This is important both in melee combat and morale checks. Pigs are a frequent goal of a given scenario, hence the name of the game. In fact, different units are given different objectives in a raid scenario, though things don't always work out the way one intends ... it can get a bit chaotic. Cards are used to determine all random events: missile fire, combat, rallying, morale checks, etc. The system is very easy to understand and there is very little in terms of a player aid needed. The only downside to the card method is that a player goes through his entire deck before reshuffling, and if he notices all the good cards have been used early, it may change his tactics half way through the game as he becomes more conservative ... Overall, a good light system, more for "fun" gaming than serious gaming.