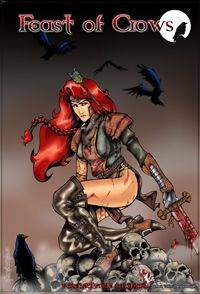 Feast of Crows is an abstract mass combat system designed to be scalable to most army size conflicts from skirmishes to nations and designed to be compatible both in spirit and in mechanics with the Open Gaming License material available, most especially that depicting the pitched battles of heroic fantasy. You don’t need to spend out hundreds of pounds on figures or spend hundreds of hours painting them to a fiddly, detailed degree. You can make do with scratch paper, your dice and a calculator or any other method of representing the battle you wish to use from miniatures to just keeping the whole idea in your head. Feast of Crows, by necessity, abstracts the nature of role-playing combat further than it already is. While some heroes, magicians and warriors alike, or some monsters, tamed or bargained into helping an army can make an impact, it is usually as leaders of the rank and file and not as individuals that they will make their mark. Feast of Crows requires little more preparation than a normal game or a normal set of character sheets and battles involving thousands of troops can be resolved just as quickly, if not more quickly, than normal party-level combat encounters while retaining the heroic, magical feel placed in gamer’s imaginations by The Lord of the Rings or other fantasy works. Feast of Crows is a feast, not only for the scavengers of the battlefield but also for the gamer seeking a good solution to resolving large scale battles as part of their epic campaigns.