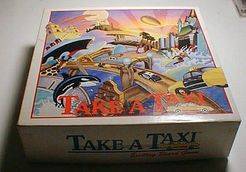 Take a Taxi is a game of luck and strategy, but mostly luck. Each player "owns" passengers and runs a taxi. The goal is to pick up as many of the other player's passengers as possible, delivering them to their destinations, collecting money and avoiding fines. All players begin with $150.00 and 4 Passenger Pawns (same color as their taxi). Players distribute their Passenger Pawns on the board, as well as Bank owned Pawns and Police/Highway Patrol Cars. The object is to pick up as many of the other players’ pawns as possible and deliver them to their destination (as determined by the draw from the card deck). Taxi drivers collect $1/space driven from the owning player of the pawn, but the route must be direct because cheating gets you a $20.00 fine and a trip back to the garage. The Bank pays for Bank Pawns. Whenever a Passenger Pawn is picked up, a Destination Card is drawn, but beware the random Hazard Card! Police/Highway Patrol Cars are moved by the current player who rolls either a ‘1’ or a ‘6’. The object is to “Bust” one of the other taxis caught in its jurisdiction (spaces marked yellow on the board). When a player has picked all the pawns he can, they head back to the garage to end the game. The person with the most money wins the game. Bank Pawns in possession are worth $5.00 each. The length of the game is dependent on the amount of players. Placement of the Bank Pawns also adds to the game length, since players can choose to keep a Bank Pawn, or put it into play: more pawns in play equals a longer game.