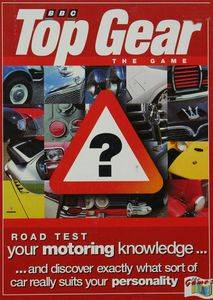 "From Alfa to Austin, from Zodiac to Zasgato, how much do you really know about cars? Well more than cars actually! If you want to hold your head up high in the car park again, you are going to have to know a lot about all aspects of motoring including motor sport, the Highway Code, and a whole lot of useless trivia. Why will this be important to you? Well to win the game of course. Oh, but much more than that, much more. Your whole reputation and street credibility could be at stake, because at the end of the game, your score will be analyzed, your personality checked, and you will find out what car really does suit you!" TOP GEAR - THE GAME is a motoring trivia game themed to the BBC TV series of the same name. Players take it in turns to spin a spinner and answer questions (from one of six different packs) as indicated. The answer given will result in a tick or a cross being recorded on the individual's scoresheet against one of four personality categories - looks, performance, running cost, safety. If the spinner points at the figure '9' rather than a question category then a marker is moved along a scale at the bottom of the spinner card. The game ends when a total of 9 '9's have been spun. The winner is the person with the most ticks on their score card. In the event of a draw the person with the least crosses is the winner. Once a winner has been declared all player can then look up their "ideal" car in the reference book provided with the rules. This is done simply by totaling up all the answers provided in each personality category (correct and incorrect) and placing the categories in order. The relative order of the personality traits will indicate whether you should be driving a McLaren F1 or a Sinclair C5.