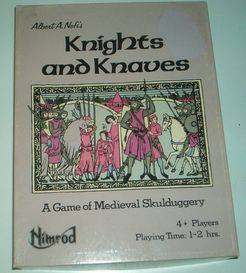 From the box &amp; introduction: "Knights and Knaves is a game for four or more players. It simulates, in a general way, the intricate relationships of the lords and vassals of a large, loosely organized Empire located somewhere in Central Europe during the High Middle Ages (ca. 1200-1400). The players try to gain wealth, power and rank while building smaller, more cohesive kingdoms within the Empire for themselves. The game contains a complete and fairly simple set of basic rules and a considerable number of optional rules. These permit infinite variations. A game usually takes from one and a half to two hours." Sequence of Play Soldiery Payment - players pay the rental for the mercenary companies they control; those he is unable to pay he must auction off; any unowned mercenary companies are auctioned Movement and Combat - You must have the permission of a realm's owner in order to move troops through it. Movement into a realm whose owner has refused you permission constitutes an attack on that realm. Taxation - players receive taxes from realms they hold; an optional rule allows for tax gouging and revolts Election - If either or both the offices of Emperor and Patriarch are vacant, an election is held for each vacant office. Any player who receives at least a third of the votes in an election gains the office; thus there might be as many as three Emperors or Patriarchs; if no player gets at least a third of the votes, the office remains empty. The map shows only the Empire's political divisions - there is no terrain. It looks like an island, as nothing beyond the Imperial boundaries is shown. The Empire is made up of 68 realms, 60 of which are actually shown on the map (with such colorful names as The Aylemark, The League of Urf Durfal[Gerg Costikyan is listed among the play testers], the Kingdom of Hydanderabad, the Barony of Pfennig-Halfpfennig, the County of Pollenzo-Montenevoso...). There are six extinct realms; if the player holding the title to an extinct realm gains control of all the realms that make it up, he may revive it, gaining its income, electoral votes and militia. The two remaining realms are the Empire itself (held by the Emperor) and the Patrimony of Polykarp (held by the Patriarch, head of the Imperial Church). The Emperor can issue the Imperial Ban, and the Patriarch can excommunicate players. The game effect of both of these actions is to force the affected player to make a roll to see whether he can collect some, none or all of his revenues during each taxation period until the ban or excommunication is lifted. Players perform game actions in order of the precedence of their highest title. The current Emperor goes first, followed by the Patriarch, then Kings and on down through the ranks to the Lord Mayors of free cities. When players' highest ranks are identical, then their second highest ranks are compared, and, if necessary, lesser ranks. Electors have precedence over non-electors, so an Elector-Duke would have precedence over a non-elector Duke. The basic game has two types of troops: Militia Levies and Mercenary Companies. Milita are not represented by counters on the map, and only fight in their home realms. There are 20 mercenary companies, with names like O'Malleys Lancers, The Baratarian Archers, Gustodud's Free Companions, The Titanian Guards and Redmohr's Pikes. All but seven are "venture companies;" they have a home realm, and the current lord of that realm (who isn't necessarily the same person who employs them) may veto their use in combat. The rest are free companies, which may always be used in combat without restriction. There is also an optional rule for Regular Soldiery, which are recruited from realms under a player's control. Like mercenaries, these are represented by counters on the map and may move. Combat is unusual in that troops are never eliminated. If a player's army is defeated, he must pay ransom for his troops; if unable to play, the opposing player captures and gains control of them. The loser may also be forced to retreat; if unable to retreat, he must pay double the ransom. If the player's noble is present, ransom is also doubled. If a noble is captured (due to being unable to pay ransom), the capturing player "may do as he wishes to the prisoner, including allowing him to be ransomed, selling him to another player, or murdering him." A noble who dies is succeeded by his heir, who inherits all lands not held as fiefs from other players, all his troops and half his treasury. Negotiation is encouraged. "The players may negotiate anything and everything within the framework of the rules." Players may sell, lend or lease their troops, and may sell realms or grant them to other players as fiefs. Victory is determined in three categories - Most Powerful(most troops), Most Noble(most titles), and Richest - so there can be as many as three winners Some of the optional rules: single combat, mutinous mercenaries, assassination and conspiracy, plague, special events and even magic. It is also recommended as being suitable for the background of a miniatures campaign in the medieval or Renaissance period.