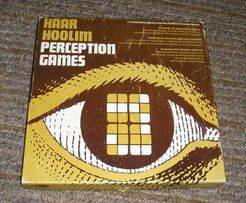 This is a collection of games using a set of 36 cards. Each card is a 2x3 grid with the squares colored in black and gold. All possible patterns are included. Some games also use a set of 40 chips in 2 colors. The basic mechanism used in many of the games is matching the cards according to the square colors. The multi-player games are listed below. There are also three solitaire games. Territorial Matching - 2 players Players match card edges in an effort to get the most on their side of the play area. Covering Match - 2-4 players Players match cards by covering sections in an effort to get rid of their cards first. The Racing Game - 2-4 players Players match cards edge-to-edge or in blocks of 4 squares in an effort to "move" as far as possible in a given direction. Rustler's Racing Game - 2 players Variant of the above where players can capture cards from each other. The Gold Withdrawal Game - 2 players Players take cards from the edges of a 6x6 grid in an effort to get cards with the most gold squares. The Chess Rook Game - 2 players The cards are assigned to Black and Gold players according to predominant color (with 10 being neutral) and moved rookwise on a 6x6 grid. The object is to capture the most opposing squares. Surrounding Majorities - 2 players Players place cards in a 5x7 grid (one card is removed) in an effort to surround cards with a majority of squares of their color. Keyhole Majorities - 2 players Similar to the above game, but played with 3 groups of 8 cards each (with holes in the patterns). Guess the Rule - 2 teams A very simplified version of Eleusis. ESP and More - 2-6 players A guessing and simple deduction game. Correct guesses are paid off based on the number of squares guessed at a time. The Game of Equidistance - 2-4 players Cards are played with matching edges. A played card reserves the space on the opposite side of the play area for the inverse card. Square Casino - 2 players Casino adapted for this set.