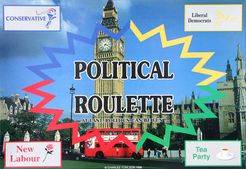 POLITICAL ROULETTE is a roll and move board game about winning a General Election in the UK. Players represent one of four political parties, with players completing circuits of an outer ring of the board (the Campaign Trail) as directed by the roll of a die, acting in accordance with the squares upon which their playing piece lands. Players try to establish a majority in the opinion polls of the fifteen areas shown on the map in the central part of the board. To gain a majority players need votes. Votes are obtained or lost in a variety of ways: - by throwing the die - votes added by holding the TV Charisma Vote - a vote subtracted by being in "Bad Press" - votes added or subtracted by the instructions of some of the Policy Cards. Once a player controls 8 of the 15 regions he may call a General Election, and if he wins it he wins the game.