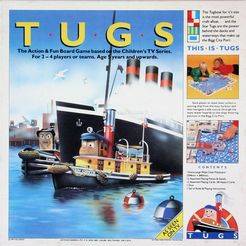 TUGS is a board game for 2-4 players from Ages 5 and up, based on the children's TV series. The aim of the game is for the players, who act as the Tugs, to collect a waiting ship from the busy harbour and then tow it via a safe course, through the water hazards, to the ships' mooring position in the Bigg City Port. The movement of the tugs in the harbour is dictated by a dice roll which permits players to move their tugs forwards or sideways the corresponding number of points (tugs cannot move backwards). If the player finishes on a water hazard spot then a hazard card is taken and then penalty shown on the card carried out. Players maneuver their tugs until they are in the space immediately in front of the ship that they have been directed to tow (this is decided by a secret card deal at the start of the game). At this point they are considered to have connected a tow-line to their charge. They then tow the ship back across the board to that ship's designated mooring point, dealing with any hazards encountered on the way. Once they have moored the ships in the appropriate berth, the tugs then have to return to their own mooring point. The winner is the first player to have successfully towed his designated ship to the correct mooring point and then returned his/her tug to its mooring position.