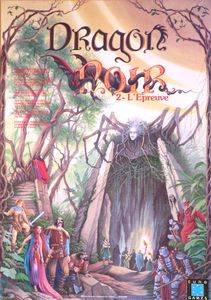 Dragon Noir 2 -L'Epreuve is the second fantasy war game in the the Dragon Noir series (Dragon Noir 1: L'Exil). After entering the caves of the dwarfs and rescuing a princess from a dragon, the group of rebel humans from Halöven, and other groups of allied orcs, dwarfs and elves, must search the Caves of Alkiram, queen of the Krobs to find a magical Orb. One player plays the Krobs (which are like giant spiders of different kinds) and the rest of the players take control of the different allied characters as they see fit (the game doesn't state a limit to the number of players). There are 6 scenarios and one to play as solitaire. The game mechanic is compatible with the games in the Cry Havoc series. Each counter represents one person with some of the Krobs taking more than one hex. Part of the Cry Havoc series.