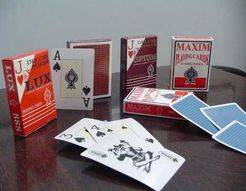 Played with a standard deck of 52 cards, the entire deck is dealt out into four piles, which are then squared and flipped into four face-up stacks. Each player, in turn, either draws a card into his/her hand from the top of one of the stacks (but never one of the four cards at the bottom of the piles) or chooses four cards from his/her hand whose suits match those of the four cards currently on top of the four piles. The four cards from that player's hand are set aside face-down into a score pile. When only the last four cards remain, players may make any last matches from their hands before scoring the round. Each player scores one point for each card taken (this will always be a multiple of four) minus the number of cards in the suit with the least cards taken (void suits don't count). In case of a tie, all players recalculate their scores with the second lowest suit subtracted as well.