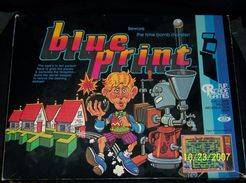 Blueprint is the obscure boardgame version of the only somewhat less obscure video-game from the early 1980s. Movement is determined by flicking a disc along a track, and moving based upon it's final position. Players must collect the pieces to build a machine, while disposing of any bombs they happen upon. Once the machine is built, it fires one shot at a time at the monster until someone hits it. Overall, a reasonable attempt to convert the arcade game into a boardgame, but other than for some memory elements and the disc flicking, there's not a lot of skill to the game.