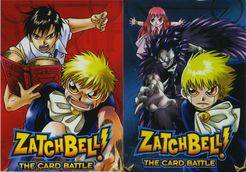 Based on the hit Anime series premiering on the Cartoon Network. Implementing an innovative spell book game system, players in the World of Zatch Bell! conjure powerful spells and unleash magical creatures against their opponents in their quest for supremacy. The starter includes a 32 card deck, special coin and a unique spell book and play mat. Additional cards can be obtained in booster packs. The spell book is a device where players build their decks in the small book and then turn the pages to cast spells, make attacks and unleash monsters on their enemy.