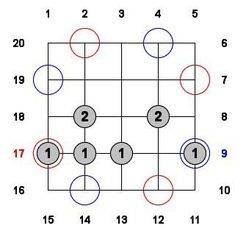 The game (designed in 2002) is played on the intersections of a 5×5 grid of lines (or strings). The game begins with a stack of 5 pieces on the center intersection, and each player has four home intersections. The first player to pull at least 5 pieces onto any combination of his or her home intersections is the winner. Both players simultaneously reveal their moves, which consist of "pulling" the end of a particular string toward the edge of the board. Between turns, stacks of pieces rest on the string intersections. These stacks are moved, split and/or combined when the ends of the strings connected to those intersections are pulled. Stacks stop when they reach the edge of the grid. Stacks pulled in two different directions are split into two equal stacks, with extra pieces added as necessary when odd stacks are split. If the same string end is pulled by both players, the stacks on that string move, but the extra stress causes the string to break. After such a move, that string cannot be pulled for the duration of the game. Bonus: Includes letters in American Sign Language on the back side.