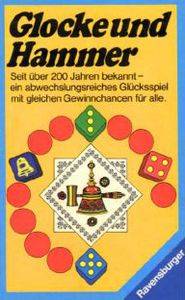 This 19th Century gambling game uses eight special six-sided dice. All the dice are blank save for one of their faces. These faces depict one to six spots, a bell and a hammer. Also required for play are 5 cards, depicting a bell, a hammer, a bell and hammer, an inn, and a white horse. Players bid for the cards and after all cards are auctioned off, take turns to roll the dice, receiving or paying bets according to the roll and the cards they hold. According to "Games We Play," the game was invented around 1800 by Viennese publisher and art dealer H.F. Müller. It was first published in Britain in 1816. Spears published the game from the 1890's through WWII.