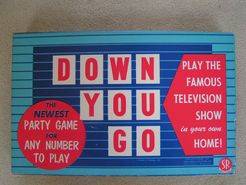 Based on the long-running (1951-56) game show aired on all four networks, in this variation of Hangman the host gives the players a cryptic clue to the phrase in question, such as "Sung by someone with no burning ambition." In the first round the players, in turn, ask a yes-or-no question about the phrase. The players then guess letters, with a wrong letter removing that player from the game (hence, "Down You Go"). The first to guess the phrase (in this case, "I Don't Want to Set the World on Fire") is the winner. The game comes with about 100 puzzles, all previously used on the show.