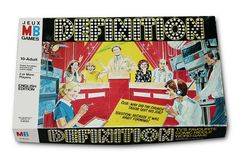 Based on the long-running (1974-89) Canadian game show, the object is to have the most cash and prizes by solving word puzzles after a predetermined number of rounds. The game master places spells out the phase by putting letters face-down on the gameboard. A cryptic clue for the phrase is then read to the players. (Sample from the box lid – Clue: Why did the tailor quit his job? Solution: Because it was habit forming.) Each player or team, in turn, will choose two letters. The first letter chosen will give the opposing team a chance to guess if it appears anywhere in the solution, while the second will benefit the team who guessed it. The team that solves the puzzle gets a prize card and plays the bonus game. In the bonus game, the letters are revealed by the game master in alphabetical order, and if the team gives the correct answer they win $10 for each unrevealed letter. Most of the parts were recycled from Milton Bradley's 1975 adaptations of Wheel of Fortune. Interestingly, the box cover predates the December 16, 1985 change to all-civilians.