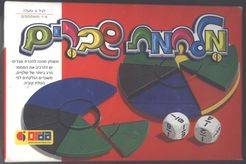 A game of action. A game of fractions. FRACTION is a game of fun and learning. Players compete to complete the circle in this test of skill and challenge. Game includes: 32 Fractional playing pieces, divided into 2 halves, 3 thirds, 4 quarters, 6 sixths, 8 eighths and 9 ninths, a number of Playing Rings, two dice, one marked with halves, quarters and thirds and the other marked with sixths, eighths and ninths. Object of the game: To complete the most rings at game's end. How to play: Each player takes two rings from the kitty with all other rings and fractional pieces remaining in kitty. As the game progresses, a player, during his turn, may take another ring rom the kitty as long as rings remain. Players cannot take rings from other players. Players in turn, roll the die. Players select the fractional piece that corresponds to the die roll and fits it to one of the two rings. Play rotates clockwise with each player rolling and placing pieces. Play continues with players trying to complete a circle. If a fractional part rolled on the die cannot be used, or does not want to use it, the player does nothing and play passes to the next player. A player, during his turn, can move a fractional part from one uncompleted ring to another without penalty. Play continues until all parts are used. Game ends at this point and the player with the greatest number of completed circles is the winner.