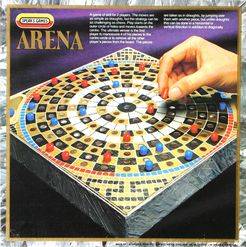 ARENA is an abstract game for 2 players Ages 7 and up. Each player has 16 pieces which are placed in the outer ring of the circular board in four blocks of four. Red starts. Players move alternately on black or gold squares, one piece at a time, one square at a time, in any direction. Entry into the inner circles may on be gained through the bridges provided. When a player gets one of his pieces to the center that piece is removed and can be placed on any vacant square on the outside edge of the board where it can be brought back into play again, providing that it is that player's turn. The first player to get four of his/her pieces into the center of the board is the winner. Players may also win by a "wipe out". This is when a player has captured the majority of an opponent's pieces so that the opponent cannot realistically attain the winning score of four. A player may move diagonally across all bridges except the two bridges at the center, where the player has to move directly on to the bridge. Pieces may be captured by jumping in any direction - forwards , backwards, sideways or diagonally. A player can capture several opposing pieces by including changes of direction in his move. Pieces may only be jumped once during any sequence of moves, captured pieces then leave the board on completion of the move. Jumping is optional - it is at a player's discretion whether to execute all possible jumps. If a situation arises where a player cannot move, then his opponent can move as many times as he likes until either he wins or an opening is made for the stationary player. The first player to get four of his/her pieces into the center of the board is the winner.