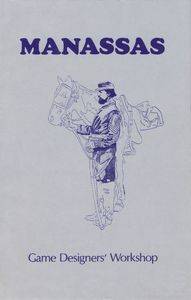 Wargame covering 1st Bull Run in the American Civil War. The game includes one rule pamphlet, one play aid with charts, one organizational card, 240 die-cut counters and one map. Scale is 0.6 miles per hex, brigade level units and two-hour turns. This game was eventually produced by GDW around 1977. Manassas is a brigade/regiment level simulation with 220 counters. Movement is simultaneous, and combat is by step reduction, with a slightly odd system in which each unit is accompanied by a marker showing current strength. There are night disengagements, weather, supply and military formation rules. from (The Comprehensive Guide to Wargaming by Nicholas Palmer, 1977)