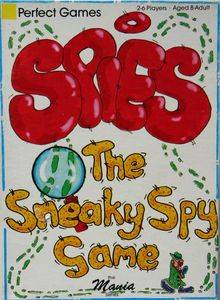 SPIES - The Sneaky Spy Game is a maze solving game. It contains pads, pencils, card stands, 47 numbered cards, 10 spyglass cards, and 24 Spy Route Cards. Each player takes a Spy Route Card and places it in a card stand so that he can see it, but no-one else can. On each card is the route of a spy, starting from one of six embassies, passing through the Secret Service building, and progressing to a point where the Spy is caught. Each route is 12 points long, passing through 12 of the 47 numbered points on the card. The aim of the game is to determine the route of the spy on the card to your left. Every turn you may ask the player on your left about one location on the Route Card. This is done by the use of the number cards by: - Taking the top card from the number deck and playing one card from what is then a hand of 5 (4 cards remain in the hand). - Calling out the top card from the discard pile. - Using a Spyglass card to ask about any location on the route. When a number is called the player to the left checks the route and provides one of the following responses: - If the number is on the spy's route then the sighting is "Confirmed". - If the number is adjacent to and in visual contact with the spy's route then the sighting is "Witnessed". - If it is neither of the above then there is "No Sighting". Information gained is marked accordingly on a Detector Pad. At any time during a player's turn a player may try to guess the spy's route. To do this he must call out the 12 numbers of a continuous route, in sequence, starting from the embassy to the spy's point of capture. The first player to do this correctly is the winner.