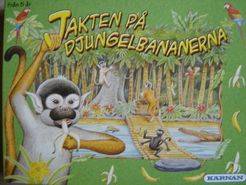 Children´s game about monkeys building bridges across a river in order to collect bananas. On their turn, the players roll the die and move their monkey along the riverside. If the monkey ends up on an empty stone, the player may start building a bridge from that stone towards the other side of the river by placing a bridge tile. If there is a bridge already, the player may extend that bridge by adding a bridge tile. A third tile completes the bridge, and monkeys may now cross the river to the other side. Each bridge tile equals one step, so you need at least a four on the die to cross on one single turn. If a monkey ends up on the same bridge tile as another monkey, the latter is moved off the bridge. When a monkey reaches the other side of the river the owning player collects one banana, and the bridge that was used to cross the river is destroyed. The first player to cross the river three times, thereby collecting three bananas, is the winner. Contents: 1 board 4 plastic monkeys 14 bridge tiles 1 die 9 banana tokens Rules are in Swedish but components are language independent. The Swedish title means "The Hunt for the Jungle Bananas".